The Rise of The Robots

Robotics is now an established science which has truly come of age.

Until just over one hundred years ago the only way of cleaning your floor was with a broom or a reverse bellow. The motorised vacuum cleaner was invented in England by Herbert Cecil Booth in 1901 but today we not only have vacuum cleaners performing that task but machines that are capable of doing the job whilst you are out too!

Washing Machines, Lawn Mowers and the such like are all early forms of robots if you consider the word to mean a machine doing a task which was formally done by human beings or animals.

Machines do not require holidays, lunch breaks or time off. Increasingly these machines are more reliable and suffer less ‘time off work’.

The Bristol Robotics Laboratory which is a partnership between Bristol University and the University of the West of England (UWE) is an amazing place to walk around. It is now one of Europe’s largest robotics research centres and is growing in international importance. 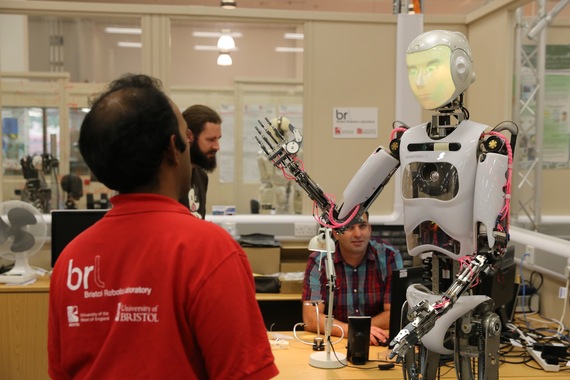 We already have driverless cars, one of which is currently being tested at the above mentioned research centre as I write.

Having robots make our daily lives easier will allow more time for the development of humanity and if handled with care could make society more equal.

It is said that we human beings only use 10% of the potential of our brains. If that is true then imagine what might be achievable if time allowed us to use double that!

Ancient Rome was a place of learning for wealthy Romans largely because they had slaves doing all the mundane tasks for them which allowed time to do more of the things they wanted to do, rather than the things they had to do! Things like cleaning the house, or in this case villa, was done by slaves. Vacuum Cleaners are slaves that do this job today so even if it is a human using the machine itself his or her job is made easier.

I have no doubt that in the future almost all household jobs will be done by robots.

The question is, will society be able to cope with millions of people having nothing to do? It is essential that Governments recognise this and plan for that eventuality now.

We human beings have a tendency to meddle and be destructive if our minds are not fully occupied in a positive way. An artist sees an image in his or her mind and then applies the brush to the canvas and a beautiful painting emerges. In the same way must accept that unless our brains are filled with good thoughts they may be filled with bad ones instead, and the canvas of future societies may be endangered by disruption and wars.

Universities will need to develop courses appropriate to populations increasingly made physically idle by the rise of the machines. Robots are here to stay, which has the potential to allow human society to develop exponentially. We must make sure that development is positive.

Governments and academic institutions have a responsibility to society to think in advance about the effect robotics will have on future generations.

The rise of the robots gives us an opportunity to create a more egalitarian society based on equal opportunity for all members of society not just those at the top, or with the business or academic ability, or perhaps right connections, to succeed.

We must ensure that everyone benefits from a science which will create so much more available time and general wealth.

Imagine robots working tirelessly to grow food in previously inhospitable areas of extreme hot or cold. Robotics can give mankind the opportunity to develop in ways never before possible.

In my opinion participating sports will play a huge role in regulating excess human energy. This can already be seen all over the country by office bound workers heading for the gym after work.

In future both participation and spectator sports will have a role to play in helping people relax and keep their bodies and minds in good shape.

Studying more subjects for longer will also become the norm with perhaps university students obtaining two or even three degrees in their lifetime. Our robots will allow more people to think deeper for longer as they increasingly take away the drudgery of mundane and even very complex tasks.

The future is something to look forward to if we plan for it correctly. Advances in robotics will be amazing over the next twenty years but integrating robots and humans may have a few teething problems to face first.

It is time for human beings to at last become just that, human beings, instead of human doings!